While reading “The alloy of law” by Brandon Sanderson – the fourth book in the Mistborn series –  I would like to recall the reviews of the former three volumes.

The Mistborne serie is quite voluminous but very well-conceived: religion and politics are elements as important as the action components. The setting is a feudal like one in a world similar to our own, despite the falling ashes and the mist all around the cities.
The mistborn who gave the title to the series are particular persons able to burn metals gaining powers from them; in this world also the misting exists, able to burn only one metal, together with more stranger beings like inquisitors and colossus.
I liked a lot this series, mainly because the writer was able to provide answers to all the questions that arises during the novels and to link them to the various prophecies contained.
“The alloy of law” seem instead set centuries after the events of the former three books and probably it can be read even without the knowledge of what happened before. 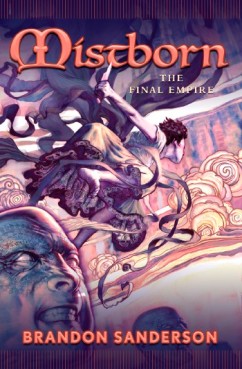 The empire is built upon a class of slaves, the skaa, and on a series of privileged classes who manages the riches, everything dominated by the Lord Ruler, a tyrant powerful like a god.
Among the nobles someone has the luck to born with allomantic powers, so the skill to burn determined metals and gain supernatural powers from them. The chances to born mistborn as lower: a mistborn is able to use all the allomantic metals.
Also the union between skaa and nobles can give birth to mistings and mistborns, for this reason women are killed after the sexual intercourse. Sometimes however they are spared and their children lives growing in talented skaas.

These are the premises of Mistborn, an engaging novel in which action, political intrigue and supernatural skills merges with the purpose to annihilate the empire and to reform the political system, a noble bud difficult purpose, because of the inquisitors and the power of the Lord Ruler.
Mistborn is a very interesting novel where the characters are well described and supported by a detailed worldbuilding; there are no excessive infodumps: the allomantic skills are described during the whole novel so the reader is able to understand their cause and effects. 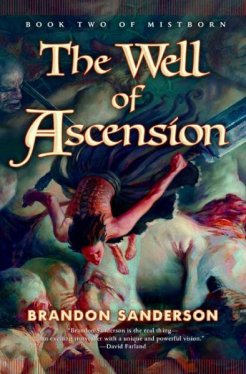 The well of ascension

Second volume of the Mistborne series; the story happens one year after the ending of the former one.
The empire is reformed and the new king must keep a stable situation despite the willing of an elected assembly, a new class of merchants and a siege outside the city.

The novel is engaging and the characters evolves during the novel while facing new problems; as in the first volume political intrigues interchange with brutal action and killings. 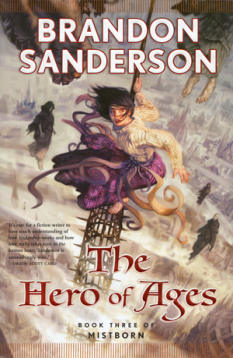 The hero of ages

Last part of the Mistborn trilogy. The novel structure is analogue to the one of the two previous books: at the beginning of each chapter there is an extract of a text – which meaning will be understood at the end of the novel.

One strong point of this novel is the fact that any possible question is answered: the various themes arose during the series will find an explanation (the mist, the inquisitor and allomancer powers etc..); the various coup de theatre keep the reader engaged till the end.