True Blood (the series) showed us that something strange goes on in Louisiana: in that case the problem are vampires and werewolves (&other supernatural), in the series by Diana Rowland the issues are human-like zombies.

The series is composed at the moment of three volumes, but a fourth one is coming. Personally my interest in the series decreased mainly because of some repetitive happenings and of an almost null character evolution.

My life as a white trash zombie

Angel wakes up in the ER and does not remember anything of the previous night; slowly she will understand that drugs have no more effects on her and that her life now depends on eating human brains.
It’s a new vision of the zombie theme, not the George Romero one, but one similar to the vampire genre; zombies are alive and live and work with humans to whom are similar provided that they constantly eat, if they don’t eat brains the decomposition begins as well as the compulsive search of food.
While Angel begins to understand her new state and carry on living with her old connections (an alcoholic father and an insensitive boyfriend) a killer wonders in the city killing people and chopping off their heads.
The novel is fluid in the beginning and the ending section, unfortunately the pace is slower in the central part; the idea of revisiting the zombie theme is interesting also because it’s allows a renovation of the genre.

Even white trash zombies get the blues

In this second part the story begins exactly after the events of the former one. The serial killer was discovered and Angel keeps working in the coroner office.
A corpse theft  and the meeting with Markus family complicate Angel’s life who will have to deal with situations more complex than the zombie killer hunting.
This series is about zombies but it deals the theme differently from the usual way, in this volume there is also the explanation of the phenomenon. Also in this novel there is an investigation carried on by the protagonist; overall it is engaging also because the plot contains some turn of events. 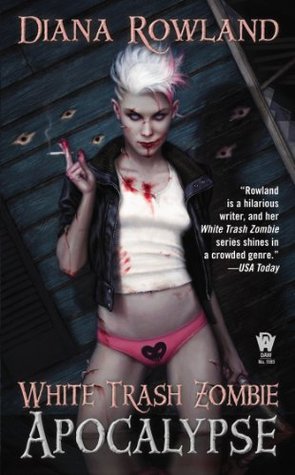 The good parts of the former two volumes were the innovative way to deal with the zombie theme, the turn of events and the various double cross; in this third novel the double cross is not so unexpected.
One of the problem of this novel are the “explanations”, Diana Rowland clearly is afraid that her reader completely forgot the plot of the two other novel or that new naïve reader [the ones who does not get that this is a following of a two novel series] are floored. Hence the explanations of how Angel become a zombie [two times: the first one for the sake of the reader and the latter for the sake of the plot] and so on.
A second issue is Angel: the character did not change much from the second book; the relationship with Marcus follows already seen dynamics.
In the end this novel purpose seems to be the creation of new doubts (Angel bite, experiments on zombies, the future assignments for Pietro) and of some space for other follow-ups.