This week I took from the library two graphic novels: Echo and Shortcomings. I was expecting the former one, while I choose the latter almost by chance; after reading them I understand how much my premises were wrong: Echo proved to be linear and nice but with a poor conclusion, while the graphic novel by Adrian Tomine, apparently about routine events, has strong emotional and social perspective. 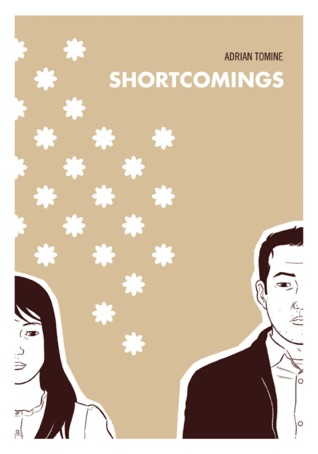 Ben Tanaka and Miko, both Japanese, live in San Francisco; their relationship has some issues since Miko has the feeling Ben is more attracted by white women than he is by her.

When Miko has to go to New York for a stage Ben has the chance to meet other women and to talk to her friend Alice, korean and homosexual, whose purpose seems to be to obtain the highest number of love conquests.

My summary may let somebody think that this graphic novel is light and about characters who only want to have fun. The author instead speaks about how hard is to integrate oneself in a different culture without losing its own: Ben – as well as Miko – is captivated by USA culture, but it feels like the total integration could be achieved by having a relationship with a white man or woman.

In addition to these cultural insecurities, the author speaks also about the sentimental ones: a proof of this is Alice Kim, always dissatisfied by her current relation and ready to move on to the next one.

This graphic novel is able to speak about real emotions and shortcomings while introducing – without  many introductions – in the life of Ben and Miko, and it’s surely a comic that realize the author desire that “the experience of reading a comic should not be the time it takes to turn each page“.