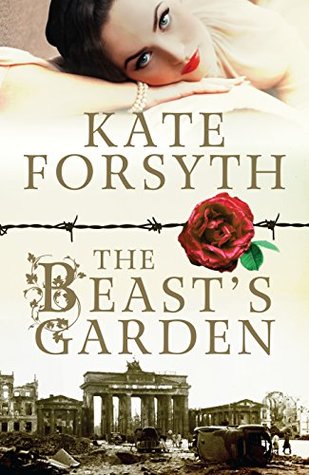 Wrote by Kate Forsyth I read The Wild Girl, that I still remember despite the time passed from the reading time and that I absolutely suggest as a beautiful and hard read. Considering these premises I had great expectations for The Beast’s Garden, retelling of The Springing Lark set in a nazism setting.

Ava is from German origins, one of her sisters work as a secretary in the SS offices, but overall her family is against Hitler’s doing. Family friends are the Feidlers, of hebrew origin; Rupert in particular is a friend of Ava, sharing her love for music.

During a night of raids Ava is able to help her friends thanks to the intervention of Leo von Löwenstein, a German officer met by chance and fascinated by Ava’s beauty and character.

This way it begins the relation between Ava and Leo, and soon it becomes a marriage. The times are hard and Ada finds hard to trust completely her husband, him belonging to the army. In the meanwhile Ada starts to help Jutta, Rupert’s sister, in her undercover operation to help the last Jew in Berlin.

The novel is overall nice and the narrative style very pleasing, but I think that the plot is quite weak: in general it’s hard for non-European authors to deal with the theme of nazism and the implications related to WWII, in this case some events are plot driven and they have a few meaning in the overall story (e.g. when Ava meets Leo’s mother and grandfather). On the other hand the main character often behave quite silly, in particular taking into account the historical setting: Ada is bold, she does not reflects on her words and this despite being part of undercover operations.

The choice of the author to retell the story of The Springing Lark is quite interesting because the fairy tale is less known than others, but the output is not convincing, and the main problems are related to the love story between Ava and Leo that begins as love at first sight.

It’s possible that my tepid comment is function of the high expectation I had, but the author got me used to better stories.