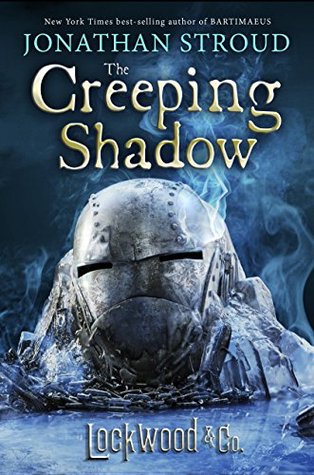 The Creeping Shadow is the fourth installment in the Lockwood & Co. series.

In the previous book (The Hollow Boy), we left Lucy deciding to leave Lockwood’s agency to protect her friends, so in this novel we follow Lucy as a freelance operator, at least until Penelope Fittes asks for her to help Lockwood & Co in a particular case.

In the meanwhile Lucy discovers that some ghost sources are sold in an auction instead of being destroyed, and she soon finds her life at risk, ending up asking Lockwood for help.

The whole group begins investigating the creeping shadow, a mysterious gigantic ghost appearing in a town far from London, but very near to a branch of the Rotwell’s agency.

The novel is as always nice and engaging, however it’s a bit disappointing with respect to the preceding one that was much more emotional. The big twist here it’s at the very end, and only in further novels we will see how this news turns out for the Lockwood & co. team.

The Creeping Shadow by Jonathan Stroud ★★★☆☆½