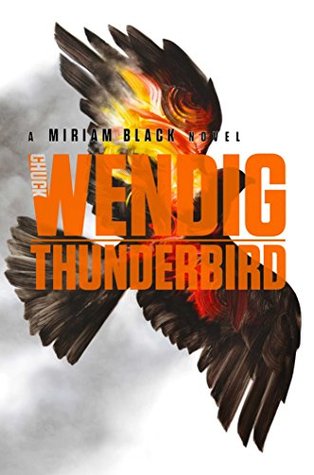 Thunderbird is the so much waited fourth installment of the Miram Black series (here the reference about the first three book), the woman who knows how and when you die by touching you.

Miriam is looking for a method to get rid of her power, that she was never especially comfortable with, and it seems there is a person who could help her: Mary Scissors.

However, finding that person is not so easy,  and during her trip Miriam finds herself involved in the action of a terrorist group with powers that want to change the world, even with extremely violent actions.

Miriam’s great dilemma will be: to get or not to get involved with all this? With the company of her usual visions and the knowledge of possessing new abilities, Miriam will take the best decision in her typical style.

The novel is extremely engaging, in particular in the latter part where I was unable to get the book down. The ending is wonderful, this book is an absolutely must for the Miriam Black fans and readers.

I already miss you, Miriam.

One thought on “Thunderbird (Miriam Black #4) by Chuck Wendig”