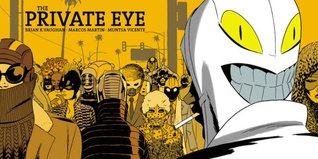 One day the cloud ripped and everybody’s secrets were secrets no more.

The generation following this event uses Internet no more, secret identities are legal and helped by masks and disguises. The police force is now the press.

A private investigator is hired by a girl who is found dead one day later. The P.I. life changes as he is involved in an intrigue with potential catastrophic consequences.

The themes behind the story are current news (the use of the web, anonymity, privacy issues,..), the story is useful to think about how few awareness we have about the much we concede to the web and what is actually private (Remember when, on the Internet, nobody knew who you were?).

The book has a nice rhythm, interesting characters and a well-built setting, honestly it was some time since a comic engaged me as much. The book collects the whole series of 10 episodes.