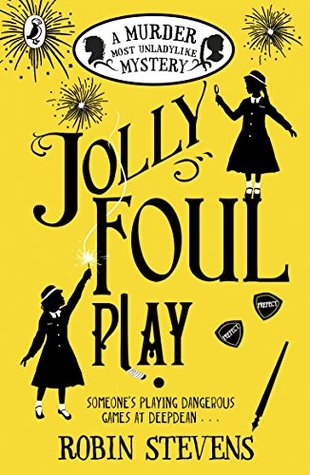 Daisy and Hazel are back to Deepdean for a new school year, that seems quite distressing for the new appointed head girl, Elizabeth Hurst, cruel collector of secrets, and for her five prefects, cruel as well towards the other students.

During Guy Fawkes’s night, after the bonfires all the students see together, Elizabeth is found dead. Everyone think it’s an incident, but the Detective Society guesses it’s again a murder; sometimes to keep her own secrets a girl may do anything.

The detecting is about finding clues and finding papers with written students secrets. This time Daisy and Hazel detect with the help of their room friends, engaging more people in the Detective Society that at the beginning was made only of the two of them.

Jolly Foul Play is the fourth installment in the A murder most unladylike mystery series (known also as Wells & Wong) and it’s nice as the preceding three. I liked the idea to involve more character in the story and the fact that Daisy and Hazel are growing up and sometimes they have a discussion.

In the background there is also a boy, Alexander, met in the third book (First Class Murder), and now Hazel’s pen friend, and it seems that in the next book we will also meet Daisy counterpart.

Here you can find the comment about the first two books of the series.