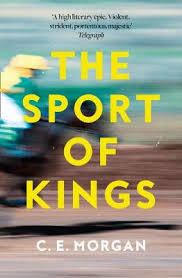 The Forge family is one of the oldest of Kentucky; the novel opens on the child Henry Forge, and on his conflict with his father, strict and bound to traditions: the Forge terrains will forever be used for agriculture.

Henry’s childhood is also marked by the discovery of her mother betrayal with an afro american man working for their family, and by the consequences of telling what he knows to his father.

Henry has the dream to breed horses, perfect beings that he sees as the apex of an evolutionary ladder; this way a new phase of his life begins; Henry is father of Henrietta and an entrepreneur obsessed by perfection.

On the other side of the borders, in Ohio, Allmon Shaughnessy grows up. Afro-american, his family is poor and since his childhood Allmon deals with criminal activities, since he is incarcerated. In jail he has a second chance to get his life better: to learn to deal with horses and then to work for the important farms that breed them in Kentucky.

While the destiny of Henry, Henrietta and Allmon get closer, the sons keep in perpetuating the errors of their fathers, in a circle that will be broken only by dramatic events.

Henry hates his father and his traditional ideas, but in the end he does the same: Henrietta’s education and her not going to college, his ill-concealed racist ideas, and the strict conviction of being possible to obtain the perfect horse, an idea linked to old evolutionary theories already proved wrong.

Allmon, willing to redeem himself from poverty and from his past as prisoner, will end up committing the same errors of his father who left him.

In the middle of these family sagas, that takes origin from the time when Kentucky’s terrains were conquered and when slaves tried to be free by crossing the river to the north, there is Hellsmouth: the perfect filly bred by Henry, named by Henrietta and tended by Allmon, maybe the horse itself a symbol of a modern slavery?

The novel is quite engaging in unraveling the story of the Forge family, and the interludes – not linked to the main plot – provide information about the past, useful in understanding the origin of the main characters. The second part of the novel, mainly focused on Hellsmouth training in view of the Derby, is slower and less engaging to the non enthusiastic about racing horses.