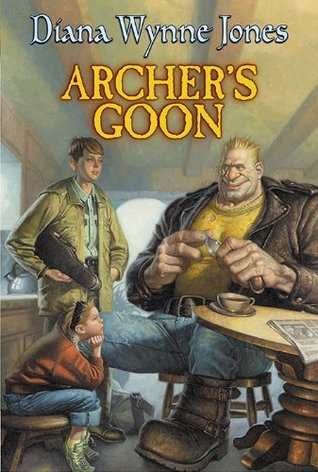 One day, coming back from school, Howard finds in the kitchen a goon sent by Archer to collect the 2000 words Howard’s father Quentin failed to deliver that week.

Soon Howard and his family understand that Archer is one of the seven wizard who rule the city: Archer deals with banks and energy, other deal with sewage system, police, crime, music and so on.

The wizards have great power, but they aren’t able to conquer the world because they are prisoners within the city boundaries. None of them knows the reason of it, but they are certain that depends on Quentin’s 2000 words and every one of them want to have them, and they will not restrain in using their power in order to convince Quentin to write other words.

Archer’s Goon is a beautiful adventure novel that goes straight to the heart of the matter and that keeps the reader attention till the unexpected ending.

It is also an omage to literature: the seven wizards control the city like Orwel’s Big Brother (moreover Archer’s Goon was published in 1984), and some references point out to the novel 1984. The writer underlines also the power of writing, and the seven powerful ones see in Quentin’s words the obstacle to overcome to gain more power.