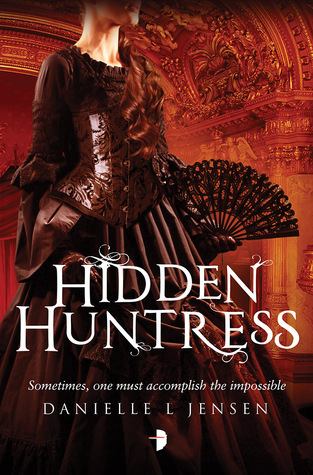 Hidden Huntress is the second chapter of the Malediction Trilogy, begun with Stolen Songbird.

The events start some months later the ones concluding the first book; Cécile now lives with her mother in town and sings in the theatre, but during the night she seeks information about Anushka, the witch who cursed the trolls and forced them to live under the mountain.

While Cécile tries to find the witch, with the help of a couple of friends, Tristan is a prisoner in Trollus, he lost his title and his riches; the king is still in power and Tristan’s friends were punished for helping him in trying to change the rules.

The novel follows the narrative structure already used in the first book: the chapter’s point of view could be Cécile’s or Tristan’s, and both of them still perceive the emotions of the other one for their magical binding.

Overall I think it’s more engaging than the first book, also thanks to the different settings where the two characters live, nevertheless I think that, like Stolen Songbird, it’s quite too long to read. The ending is foreseeable thanks to the hints in the story, but maybe it could have been better to be surprised than having some hypothesis confirmed.

The book leaves space for the third – and final – book, that I will read, despite some elements introduced in the conclusion are somewhat inconsistent with respect to the story so far (without spoilering, some things were never hinted).

Those words, though heaven only knew how often she had heard them, still gave her a thrill. They braced her like a tonic. Life acquired significance. She was about to step from the world of make-believe into the world of reality.