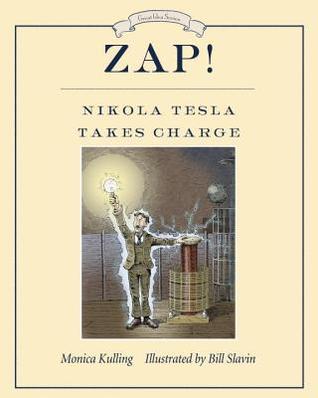 Zap! Nikola Tesla Takes Charge is a children book about Nikola Tesla’s life, him being a great scientist we often forgot about.

Tesla is born in Croatia and moves to the United States of America where he finds work under the command of Thomas Edison. Tesla’s skill are great and soon he discovers the alternate current (the one we actually use in our homes), Edison instead believed in continuous current, so he began opposing Tesla’s discovery.

Tesla’s life is both sad and unlucky: Edison’s campaigns against him, his patents used by other people to make further discoveries (like the telephone), his genius unappreciated. The book, being for children, does not point out Tesla’s misfortunes, but focuses on his great ambitions. The illustrations are good and functional to the story, too bad the story itself ends quite abruptly.